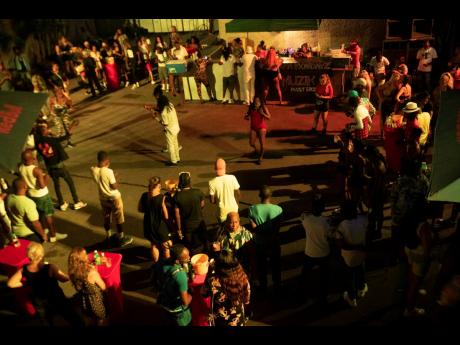 Patrons enjoying themselves at Uptown Mondays, the last staging before the islandwide nightly curfew returned to 8 p.m., starting yesterday.

'Witty', as he is known across the dancehall sphere, said the protocols must be followed and expressed glee that the entertainment sector remains open, as there were fears it would be closed again to help curb the spread of the novel coronavirus.

"One thing, we have to follow what the prime minister say, and if you don't follow the protocol that the prime minister say, you're in a lot of trouble", he told THE STAR at Monday's staging of the event, which is held at Savannah Plaza on Constant Spring Road. Patrons were out in their numbers dancing up a storm to music by resident DJs Harry Hype and Boom Boom, the latter telling patrons to work with the new measures and encouraging partygoers to come out early.

There are tighter nightly curfew hours imposed for the next two weeks. The curfew now runs from 8 p.m. to 5 a.m. from Monday to Saturday and from 3 p.m. to 5 a.m. on Sundays. The 3 p.m. curfew also applies to the Emancipation Day and Independence Day public holidays. Holness said the nation can expect tighter measures when the current restrictions expire on August 10 as the Government was taking pre-emptive action. Witty and other promoters are already making plans to adjust their event times.

"You will have Uptown Mondays at 4 p.m. until the prime minister say we have to go home," Witty said. Another event promoter, Kenroy 'Ken' McLarty, who is scheduled to host his annual Big Dreams Breakfast Party on Sunday at Sebastian Lounge in Golden Spring, St Andrew, said he has had to adjust his event hours.

He told THE STAR, "The hours is a main factor to bring the patrons out. It (new measures) a go affect me and other promoters because of the hours. We were looking forward to like from 8 a.m. to 5 or 6 p.m. but we have to cut it and start from 8 a.m. to 2 p.m."