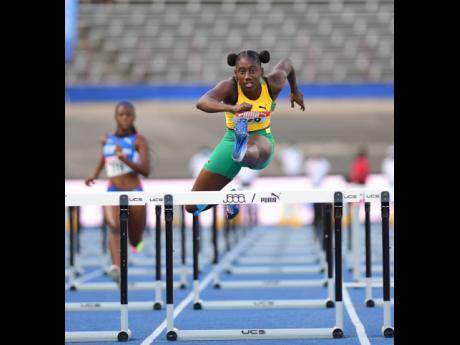 Petersfield High's Alexis James is highly motivated to achieve a lot more silverware next season, having won a silver medal at last month's World Under-20 Championships in Cali, Colombia.

The 18-year-old James finished second in the final of the 100 metres hurdles behind her national teammate Kerrica Hill.

It was James' first global medal, which she believes has boosted her confidence going into next season.

"This is added motivation for me to know that I went out there and won a silver medal on the global stage. I am very proud of my achievements because I wanted to win a medal for my country and I did that and I am very grateful.

"This will let me work a lot harder because I want to win the event at Champs and also at the Carifta Games next year," James said.

The soft-spoken James is the second fastest junior in the world this year in the 100 metres hurdles with a personal best time of 12.87 seconds, which she achieved in Colombia. Hill is the fastest in the world this season with 12.77.

According to James, she is aiming to lower her time in the event next season.

"I am now more inspired to become the best hurdler next season and so I am going to work very hard in training to achieve that.

"I know that I can do it because I have to become a great hurdler in the future and to make my family and friends very proud," she stated.