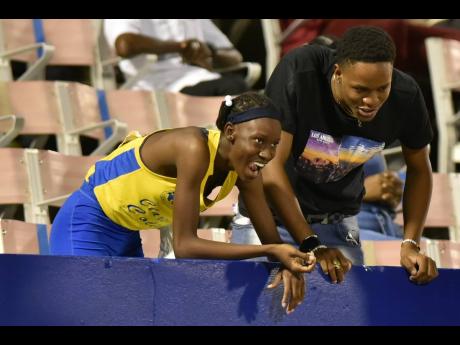 Clarendon College’s Dejanea Oakley (left) celebrates with her brother after claiming the Class One Girls 400m title at the ISSA/GraceKennedy Boys and Girls’ Athletics Championships at the National Stadium last night. 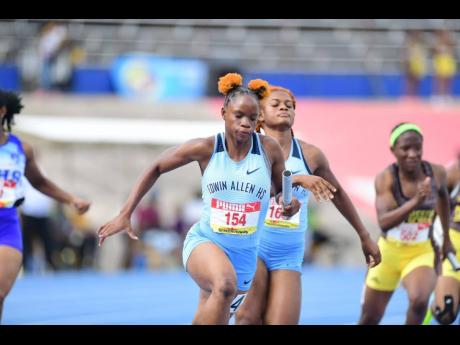 Edwin Allen High school’s Tia Clayton runs with the baton during the preliminary round of the Class One Girls 4x100m relay on Thursday. 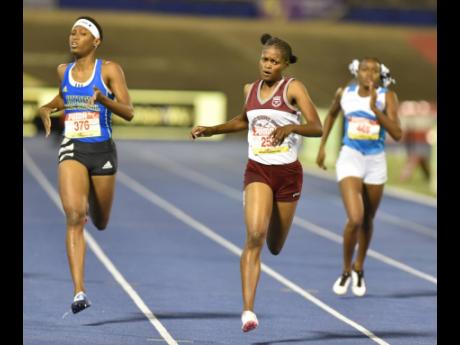 Oakley, 17, won the event in a personal best (PB) time of 51.81 seconds. She turned back the challenge of Hydel High's Oneika McAnnuff, who was second in a PB of 52.38 while third went to Vere Technical's Kaylia Kelly in 53.59.

"It was a difficult race because I had to put out most of my effort to win," she said. "It will boost my confidence that I can give my all even after running a race before, and for my career and the future, and I think it will benefit me a lot."

Oakley also credited her coach, Olympian Maurice Wignall, for her success this season.

"My season hasn't been great, but I knew what my coach was coaching me would come out in the end. So, yes, I was confident," she said.

Ferncourt High's Abigail Campbell dismantled the field to win the Class Two 400m in 53.75. Edwin Allen High's Natasha Fox was second in 54.26 and third went to Hydel's Alliah Baker in 54.44.

St Jago High's Jamora Alves captured her second gold medal at Champs this year when she won the Javelin Open event with a mark of 40.30m. She also won the gold medal in the Class One discus on Wednesday.

Edwin Allen's Monifa Edwards took home the silver medal with a throw of 38.90m while Natalie Albert of St Catherine High claimed the bronze with a mark of 37.14.

A few minutes later, Alexia Williams won Jago's second gold medal when she captured the Class Four long jump with a mark of 5.36m. Hydel's Sashana Johnson was second with a leap of 5.27m, and third went to Edwin Allen's Yasheika Sinclair with 5.23m.

A leap of 1.74m brought gold for Williams, who finished ahead of Daneille Noble, who secured the silver with a height of 1.71. Edwin Allen's Asia McKay earned the bronze medal on countback after also jumping clear of 1.71.

Edwin Allen eased into the final of the Class One girls' 4x100m relay after outclassing their opponents in the heats. The Michael Dyke-coached team, who are the fastest high school in the world this season with a time of 43.37 seconds, cruised to victory to win the event in 45.32.

Edwin Allen will start as the favourites in Class Three after comfortably winning their heat in 47.09.