Thanks mom! - Tina Clayton spurred to 100m title after words of confidence from parent 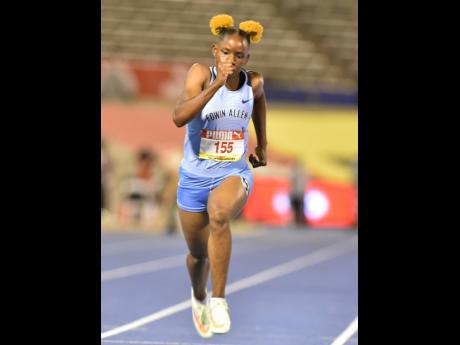 Edwin Allen High School’s Tina Clayton on her way to victory in 11.23 seconds in the Class One Girls 100m final at the ISSA/GraceKennedy Boys and Girls Athletics Championships at the National Stadium last night. 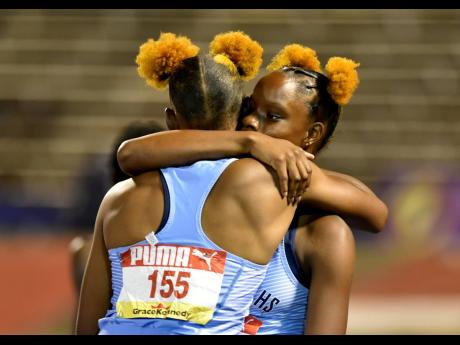 Tina is congratulated by her twin Tia (right), who finished third. 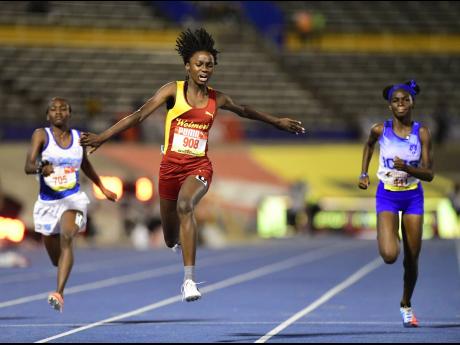 Newly crowned ISSA/GraceKennedy Boys and Girls Athletics Championships (Champs) Class One Girls 100m champion Tina Clayton said she was low on confidence entering the final last night, but a pep talk from her mother and coach got her across the line.

Tina, who is the World Under-20 100m champion, sped to 11.23 seconds to defeat Hydel High School's Brianna Lyston, who was second in 11.26. In fact, Lyston, who defeated Tina in their semifinal match-up, had the fastest time this season (11.14) entering the championships. Tina's twin-sister Tia was third in the event in 11.47.

"I was a bit doubting myself because I didn't have a lot of confidence at one point, but my mother is the driver of all this, and my coach, and without them I would have my confidence up so that I could take this title," Tina said after the race.

"I am pleased with the time, knowing that my season does not end here because it continues until August and I know that before the season ends, I will run a faster time.

"It was a great final because a lot of competitiveness was there, but I am grateful that I pulled through and won this race."

Edwin Allen's Thieanna Lee Terrelonge won the Class Three event in the 11.60, ahead of St Jago's Camoy Binger, 11.73, and Shemonique Hazle of Hydel, third in 11.75.

Wolmer's Natrece East produced a dominant performance to win the Class Four 100m in 11.81. Moesha Gayle of Edwin Allen was second in 12.03, and Excelsior's Janelia Williams took third in 12.10.

Edwin Allen enjoyed the middle-distance races as they won two out of the three 1500m events.

Edwin Allen was denied the sweep with Jessica McLean finishing third in Class One in 4:37.06. That race was won by Holmwood's Jodyann Mitchell in 4:36.39 and second went to St Mary High's Shone Walters in 4:37.05.

In the field, Victoria Christie of Camperdown High won the Class Two shot put with a mark of 14.59m. Hydel's Natassia Burrell took silver with a throw of 13.99 and the bronze medal went to Immaculate's Maja Henry with 13.51m.