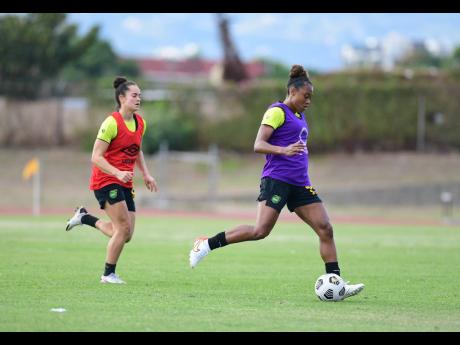 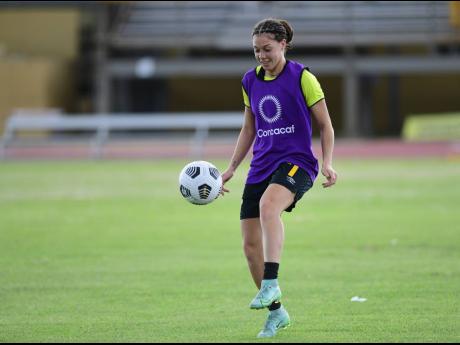 Jamaica’s Chinyelu Asher juggles the ball during the Reggae Girlz training session at Stadium East in St Andrew on Tuesday. 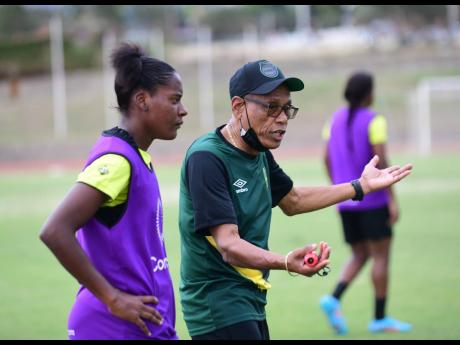 NATIONAL SENIOR women's football team head coach, Vin Blaine, said the Reggae Girlz will be looking to feed off their home fans' energy when they take on Bermuda in their opening match in the Concacaf World Cup qualifying competition at the National Stadium today. The game is set to begin at 7 p.m.

The Jamaica Football Federation (JFF) has been granted Government approval for 2,500 fully vaccinated fans to attend the match, in the grandstand area only.

This is a big turnaround from the Concacaf men's qualifiers, where the Reggae Boyz were not allowed any fans for all but one of their World Cup qualifying games, including the most recent home matches against Mexico on January 27 and Costa Rica on February 2.

"It (having fans) is very important to us because they will be cheering on the team," said Blaine. "It will be a small crowd, but it better than what they had before.

"I think it is good for them to be appreciated and to get their energy up, and the adrenaline rush going. I am really looking forward to the 2,500 spectators because it will be important for us to have them in the stands," he added.

The Reggae Girlz are currently ranked 51st in the world, compared to the Bermudians, who are rated 166th.

Blaine said the Jamaica women's team is extremely confident ahead of today's match.

"It is extremely important that we get the three points because any competition that you play the first game is very important for many reasons," he noted. "Progressing through the zone we don't have to worry about it because we would have had one (win) under our belt already, so it is very important that we get the three points tomorrow (today)," he said in yesterday's pre-game press conference.

The Jamaicans will be without the services of Deneisha Blackwood, captain Konya Plummer and Havana Solaun, who have not been called up for the February window. The trio was part of the Reggae Girlz team that participated at the 2019 FIFA World Cup tournament in France.

Despite their absence, the veteran coach pointed out that he is expecting some exciting football from his team.

"I am confident as well and should be and I have to be," he said. "But based on the skills that they have and their abilities and the depth that we have makes me a lot more confident."

Striker Khadijah 'Bunny' Shaw is expected to captain the Jamaican team in the absence of Plummer.