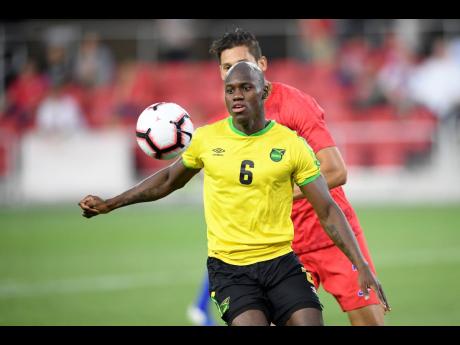 Jamaica forward Dever Orgill (6) watches the ball against United States defender Omar Gonzalez (back) during the second half of an international friendly soccer match, last Wednesday.

National striker Dever Orgill said he is itching to score his first senior goal for the Reggae Boyz when they participate in this year's CONCACAF Gold Cup tournament, which begins next week.

Orgill, who currently plies his trade for top-flight Turkish Super Lig side Ankaragucu, has failed to score a goal for the Reggae Boyz in 10 appearances.

"My aim is to score my first international goal for Jamaica's senior men's team and so that is my object and so I am going to work on that," Orgill said.

The former Titchfield High School star will be playing in a tournament for the first time for the Reggae Boyz since the Copa America tournament in 2016, due to injury.

Orgill, who recently played in the Reggae Boyz 1-0 victory over the United States, told STAR Sports that he is happy to be back in the national team and he is looking forward to putting on a good show at the tournament.

"The US game was a test game for us and we passed that test. We are looking forward now to going into the Gold Cup and, hopefully, we can continue with a victory in the Gold Cup," he said.

LOOKING TO THE FUTURE

"I have scored goals for the youth teams, but that is in the past and so I am looking to the future to get some goals for the senior national team."

Orgill, who was transferred from Austrian side Wolfsberger to Ankaragucu in January, has scored six goals for the Turkish side. However, before his move to Turkey, Orgill netted four goals for Wolfsberger.

He pointed out that he has adjusted well since making the move to Turkey in January because he has helped the team avoid relegation this season.

"It was a last minute move because I went to training camp in Turkey with the Austrian team and my agent came to me at the hotel and said we have to make this transfer and after that I have been scoring goals for them," said Orgill. "I took the team out of relegation and now they are staying in the top league in Turkey," he said.

The Reggae Boyz will get their campaign started at the Gold Cup against Honduras at the National Stadium on June 17.