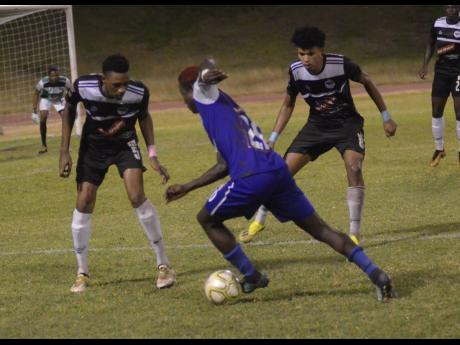 National defender Jamoi Topey said he is very delighted to be named in the Reggae Boyz squad for this year's CONCACAF Gold Cup tournament and he is looking forward to putting on an excellent show for the country.

The 19-year-old Topey, who is rated as one of the top young defenders in the country, plies his trade for Bethlehem Steel in the United Soccer League in the United States. In fact, Topey joined the Steel in March from Red Stripe Premier League side Cavalier on a one-year loan deal.

The lanky defender who stands 6ft 6', has made one appearance for the Reggae Boyz.

"I am feeling overwhelmed to be named in Jamaica's Gold Cup squad because I have worked hard all my life for this and so I am just happy to be part of the team," said Topey.

"At age 19 and to be named in the squad is a very big boost for my career and so I just need to continue doing my best every time that I step out on to the field of play," he said.

"Whenever I get my chance, I am just going out there to deliver because this is my dream to represent my county at an international tournament," Topey said. "I am looking forward to it. I know that the team will do very well at the tournament."

The former Camperdown Manning Cup standout pointed out that since his loan move to the Steel in March, his game has improved significantly because he has been getting a lot of playing time at the club.

"Everything have been going well so far because I have played in every match for the club and my performances have been getting better with each that I play," said Topey.

"I am still getting to know the players and my surrounding but I think that I have settled well in the team," he said.

The Reggae Boyz will get their campaign started at the Gold Cup against Honduras at the National Stadium on June 17.