Best goal of my career – Nicholson 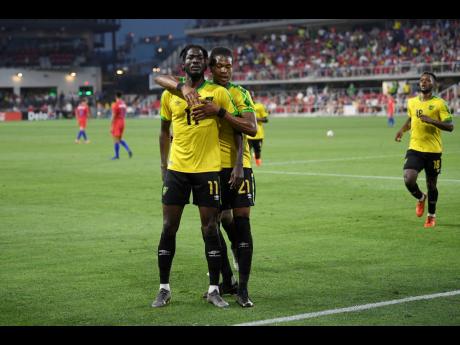 Jamaica forward Shamar Nicholson (11) celebrates his goal with Kevon Lambert (21) during the second half of the team’s international friendly match against the United States on Wednesday.

National striker Shamar Nicholson has described his goal against the United States for the Reggae Boyz in their friendly international on Wednesday in Washington DC as the best goal of his career.

Nicholson, who came on as a 55th-minute substitute, picked up a ball outside of the box and made room for himself before unleashing a rasping right-footed shot past the US's custodian Zach Steffen.

The 22-year-old, who plies his trade for NK Domzale of Slovenia, told STAR Sports on his arrival at the Norman Manley International yesterday that he is very delighted with goal.

"It is a great feeling because it was destined to happen because I made my debut against the US two years and so to score my first goal against them is a wonderful achievement," said Nicholson.

"I have scored a lot of good goals, but this is the best one that I have scored in the career so far," he said. "I think this one was really fantastic because when I look back at it, I am like wow, I can't believe that I score a goal that."

The former Boys' Town player added that the goal given him a lot more confidence going into the Concacaf Gold Cup tournament later this month.

"My confidence level is at a level that where it is very high, but this was a friendly game because we have the Gold Cup coming up and so now is just to keep the head work a lot harder," said Nicholas, who netted 13 goals for NK Domzale in the Slovenian league this season.

"To score 13 goals in Europe big for me because it is Europe and no league is Europe is easy and if you get into double figure is a good accomplishment," Nicholson said.