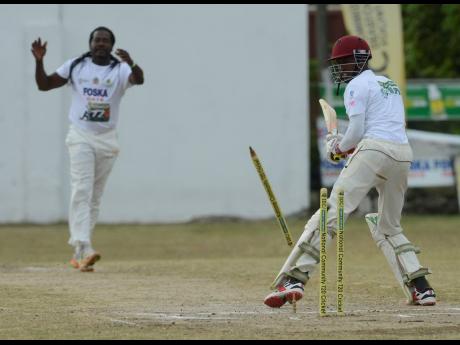 Davion Wilson from Yallahs looks back as his stumps go flying after he was bowled by Keith Edwards during the Social Development Commission (SDC) T20 Cricket Competition at the Goodyear Oval in St Thomas on Sunday, May 26, 2019.

Discarded national pacer Keno Wallace said he has been working very hard in training to improve his game as he hopes to make a return to the national set-up.

Wallace, 29, who has been bothered by a series of injuries during his career, told STAR Sports that he is slowly regaining his fitness and he has also been improving his craft in a number of local competitions in which he has taken part this season.

"I am just trying to get fit and ready and bowling at a much faster pace because I have been off my game for a while now, and I am trying to get better so as to make the national team," said Wallace.

"I just need to bowl fast and get some wickets, and once I do that, then I know that I will be able to get back into the national team."

The lanky player, who is competing for White Horses in the Social Development Commission (SDC) T20 competition this season, last represented Jamaica in the Regional Four-Day Competition in 2014.

Wallace added that this season has been a good one for him because he did extremely well in the recently held Jamaica Cricket Association (JCA) Senior Cup competition.

"This SDC competition will also help me a lot because I am just focusing on bowling some good lines and length and increasing my pace, and that is what I have been working on at the moment," he said.

"I have been putting in a lot of work, and so I am also working on my control, and this has been coming along quite well for me because I have seen improvements in my bowling," Wallace noted.