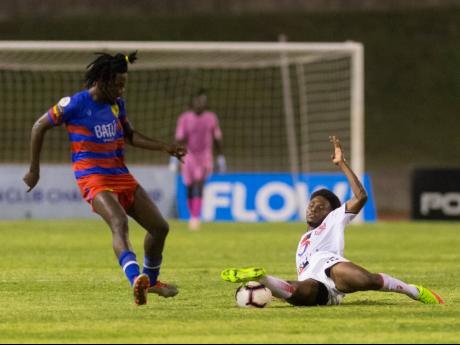 Portmore United have advanced to the CONCACAF Champions League after playing to a 1-1 draw with Waterhouse FC in the FLOW Concacaf Caribbean Club Champion at Stadium East last night.

With the draw, Portmore, who are the reigning Red Stripe Premier League champions, finished atop the four-team standings with seven points, two ahead of Waterhouse. Both teams were followed by Haitian clubs AS Capoise with four points and Real Hope Academy on zero.

Javon East scored for Portmore in the 25th minute, while Andre Fletcher netted for Waterhouse in the 61st minute. East gave Portmore the lead when he fired home from the penalty spot past Waterhouse custodian Akeem Chambers. This was after Ricardo Morris was brought down inside the penalty box by defender Shawn Lawes. East should have doubled his team's advantage five minutes later but his powerful effort from 12 yards out went high over the crossbar.

Denardo Thomas received Waterhouse's best scoring chance in the first half but his weak shot from 10 yards went straight into the hands of goalkeeper Shaven-Seam Paul in the 43rd minute.

Waterhouse started the second half looking much the better team and they were rewarded with an equaliser when Fletcher dribbled around two defenders to fire home from an acute angle past Paul.

First, Thomas' header was tipped over the crossbar by Paul and a minute later, Thomas' tap in from five yards was cleared off the line by Portmore's defender Damano Solomon.

Earlier in the day, AS Capoise secured third spot in the competition after defeating fellow Haitian club Real Hope Academy 3-2.