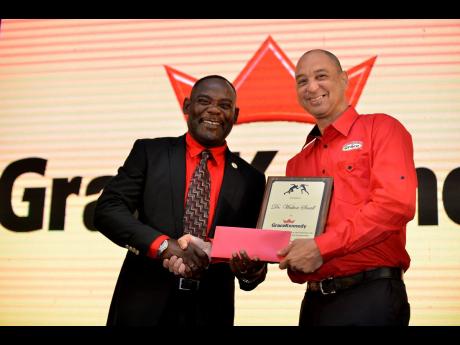 Don Wehby (right), group chief executive officer of GraceKennedy Limited, presents president of the Inter-secondary Schools Sports Association (ISSA), Dr Walton Small, with a plaque and a cheque at the Spanish Court Hotel yesterday for his long and dedicated service to ISSA. Dr Small will be stepping down as president of ISSA at the end of the school year.

Newly designed medals will be presented to the top finishers in each event at this year’s ISSA/GraceKennedy Boys and Girls’ Championships. The 109th championships will be held at the National Stadium, March 26-30.

Speaking at yesterday’s official press launch at the Spanish Court Hotel in New Kingston, Colleen Montague, chairman of the organising committee for the championships, said that her organisation has adopted a new and sleek design on the medal, which features the Doctor Bird, Jamaica’s National Bird, on the back.

“We felt it was time that we change them because we had the past medals for years and so we decided that this year we will give the athletes a new look, a new feel, and just introduce something that is new and different for them,” said Montague.

“Young people always want something new and it has the Doctor Bird on them because we wanted to include a Jamaican symbol and so we chose the Doctor Bird because they are always in flight,” Montague said.

A record 113 boys’ schools and 108 girls’ schools and more than 3,000 athletes have registered to participate in this month’s championships.

Montague added that they are anticipating a very exciting meet.

We are expecting another fabulous event because the athletes have been burning up the track at the development meets and so we are expecting tremendous support from the Jamaican fans and we are looking forward to the athletes giving of their best,” she said.

Montague also announced that Caribbean Airlines is now the official air carriers for the championships.

Meanwhile, Don Wehby, chief executive officer of title sponsors GraceKennedy, said his company will be pumping a total of $120 million in this year’s championships. He said $80m will go directly towards the event, while $40m will be used in a marketing campaign.

Tickets for the event will go on sale on Tuesday, March 26.