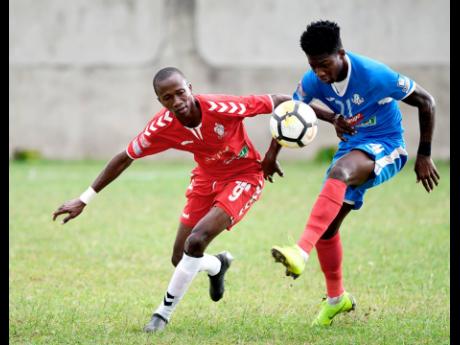 Head coach of UWI FC Andrew Peart said they are determined to preserve their unbeaten run against defending champions Portmore United when the teams meet in their Red Stripe Premier League encounter on Sunday at the UWI Bowl. Match time is 3:30 p.m.

UWI, who are currently fifth in the standings with 42 points, have so far not lost to Portmore this season.

In fact, in their two previous meetings during this campaign, UWI recorded a 2-1 win over Portmore, while the other encounter ended in a 1-1 draw.

Peart told STAR Sports that they are aiming to win their five remaining games in order to move up the table.

"We need to matriculate more points because I think 50 points is what every team is battling for in order to secure a top six spot, and if we can get 50 points, then we can be assured of a spot in the top six," said Peart.

"We are eight points out of that and we are going up against a Portmore team that have not beaten us this season and so we are feeling pretty confident," he added.

The coach is nevertheless expecting a tough contest, given Portmore's consistency this season. The champions have only failed to pick up a point in four of their 28 games this season and are of course five points ahead of second-place Waterhouse and eight ahead of Cavalier, who are third on 48 points.

"It will be a tough game," said Peart. "They are the most consistent team in the league this season but our team has shown incredible character and so we expect to take the game to Portmore."

"We are confident, but we are mindful that we are coming up against the best team in the league, which is Portmore, and so we have to work hard and believe in ourselves in order to secure all three points," Peart added.