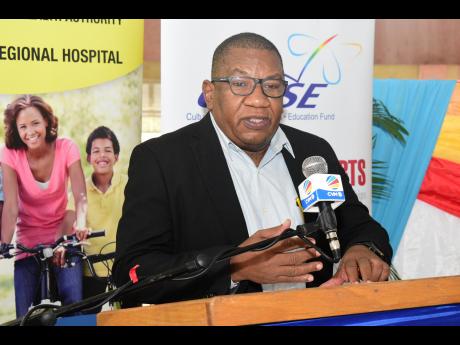 Regional Director for the Southern Regional Health Authority (SRHA), Michael Bent, is especially pleased to have received financial support from the CHASE Fund to help in the makeover of the Chapelton Community Hospital.

Thousands of patients will benefit annually from improved healthcare services when the renovated Chapelton Community Hospital reopens in early December.

Funding in the amount of $132 million was provided by the Culture, Health, Arts, Sports and Education (CHASE) Fund to cover phase two of the upgrade activities at the Clarendon-based facility. This complemented the US$1 million provided by the United States-based Push Start Foundation to complete the first part of the project, which began in 2019.

Regional Director for the Southern Regional Health Authority (SRHA), Michael Bent, is especially pleased to have received financial support from the CHASE Fund to aid in the makeover of the 119-year-old building.

“The CHASE Fund has been a major funder for this project. The [donation] has allowed us to make some very needed improvements at the community hospital. So, what we now have is a 21st-century facility,” Mr Bent said.

A final component of activities to be funded by CHASE includes the installation of a generator, which is now at the procurement stage.

The Regional Director said that one of the substantial benefits of CHASE’s grant was that it allowed for the construction of a perimeter wall.

“The community hospital is much more secure now with the finished improvements. Prior to the fence, it was a thoroughfare for persons going through the community,” he noted.

Mr Bent pointed out that the renovations have positively impacted the mood of the staff.

“With the staff having a modern facility and infrastructure, their attitude and energy have been boosted significantly. They are promising to deliver care with much more compassion. We will be offering the same services that were there prior to the renovations,” he added.

The Chapelton Community Hospital offers both secondary- and primary-care services to include inpatient care, prenatal and postnatal care. Outpatient care, such as dental, curative, sexually transmitted infections, and family planning, among others, are available at the respective clinics.

During the upgrade, the provision of healthcare was scaled back, and some services were carried out temporarily at the Summerfield Health Centre. Several staff members were relocated to other facilities and patients who required observation were sent to the May Pen Hospital. The general operational hours were reduced to 12 down from a full day.

Mr Bent said that the renovations have positioned the Chapelton Community Hospital to better facilitate the underserved members of the communities in and around the area. These include Summerfield, Effortville, Blackwoods, Crooked River, Frankfield, Mocho, Kellits and parts of St. Catherine.

“We anticipate that more persons will be gravitating towards the hospital. We currently serve a population of approximately 70,000. Before the renovations we had an average of about 3,000 persons per day coming in, and we are expecting about 3,500 patients now,” he noted.

“We want to encourage users of the facility to take care of it. The management intends to also take care of and cherish it. The hospital is very necessary in the rural community, and it is for you,” Mr. Bent added.

For his part, Chief Executive Officer of the CHASE Fund, W. Billy Heaven, is pleased with the impact that the grant has made.

With Clarendon being one of Jamaica’s most populous parishes, the CHASE Fund deemed the renovation project a worthwhile endeavour.

Mr Heaven told reporters that a further $132 million had been approved to equip and upgrade seven healthcare facilities islandwide since the beginning of the financial year. It also covers the provision of services to users of health centres and residents of infirmaries.

The renovation works of the Chapelton Community Hospital were completed in July 2022. The makeover also saw the National Health Fund (NHF) providing funding support for the inclusion of additional parking spaces, construction of dietary, laundry and linen departments and a staff lounge.

Additionally, the construction of a 20-bed ward was a part of the project.