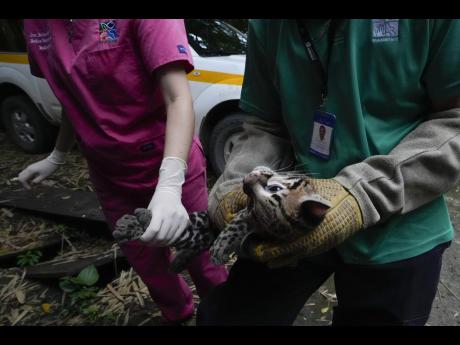 An ocelot is given medical care as he is prepared to be released back into the wild, at a Ministry of the Environment rehabilitation center in Panama City, Wednesday, Sept. 28, 2022. The center protects wildlife rescued from illicit trafficking networks. (AP Photo/ArnulfoeFranco)

ANCON, Panama (AP) — In a tropical forest beside the Panama Canal, two black-handed spider monkeys swing about their wire enclosure, balanced by their long tails. They arrived at this government rehabilitation centre after environmental authorities seized them from people who had been keeping them as pets.

In the coming months, biologists and veterinarians will shift them to a diet mirroring what they would eat in the wild, help them re-learn skills to survive in the jungle and wean them from human contact.

Panamanian authorities are trying to raise awareness about the dangers — to humans and wildlife — of keeping wild animals in their homes. This month, Panama hosted the World Wildlife Conference, where participants voted to tighten restrictions on the international trade in animals and plants.

Black-handed spider monkeys are listed in the most endangered category of international species, and Panama’s Ministry of Environment say they are in “critical danger.” Trade in the monkeys is permitted only in exceptional circumstances.

“People don’t understand they can’t buy a wild animal from someone who doesn’t have authorisation to sell it,” said Felipe Cruz, the Environment Ministry’s adviser on environmental crimes. “The environment can’t take any more. We’re at a critical point.”

From January through September, Panama’s Attorney General’s Office had recorded 19 cases of wild species trafficking and 14 cases of extraction of species that were protected or in danger of extinction. Shirley Binder, an adviser to the Environment Ministry, said the real extent of the problem could be greater.

“The country is big, there could be cases that we don’t have,” Binder said. “We have formed strategic alliances with security sectors that now are conscious of the environmental issue, ... but we also need the support of citizens generally so that when they see these cases they report them.”

Earlier this year, the government introduced a catalog with photographs and technical details to assist in the identification of the most commonly trafficked species. The plan was to distribute it to security, border and customs authorities nationwide.

Panamanian law strictly limits the possession of wildlife. The Environment Ministry issues permits to zoos, breeding centres or for the raising and consumption of some sources of protein such as deer and iguana, but not for endangered species.

Biologist Samuel Sucre operates one of those businesses, Natural Tanks, which has government permits allowing him to collect amphibians and reptiles from the wild and breed them for sale.

Sucre said the government closed down some “ghost farming” operations.

“These farms were claiming they were breeding the frogs, but in reality they were just field collecting them and then claiming that these were bred (on) their farm,” Sucre said.

“The problem with the illegal trade in countries like mine, developing countries, people don’t understand the value of that resource,” Sucre said. The people who want to sell animals go to residents of rural areas who have very little income and offer payment per frog.

He advocates instead for finding sustainable ways to commercialise some species so people can learn the value of the natural resources and make a living.

Spider monkeys are among the most popular wild pets, said Erick Núñez, the Environment Ministry’s chief of national biodiversity. “They’re usually friendly with people ... however, when they reach the age of sexual maturity, when they become jealous, they can become aggressive and attack people,” he said. “That is the natural behaviour of the species when it is stressed.”

Primates can adapt relatively well to living in with humans, making their rehabilitation especially challenging, he said.

The new government rehabilitation centre, which was built on land adjacent to former U.S. military facilities, began receiving animals during the COVID-19 pandemic. Animals cycle in and out, but it holds up to 50 animals and there are plans to expand.

Primates like the spider monkeys are among the most frequent arrivals, but the centre also receives cat species such as ocelots and jaguarundi, and birds including toucans and owls.

The two spider monkeys that arrived separately this year have long rehabilitation ahead. “They are animals that are very used to human presence,” said Núñez. “Here we only come once a day to bring food. The contact with us is very scarce.”

For now, they feed them fruit such as papaya and mango, but biologists also collect fruit from the jungle. As they get closer to being released, their diet will shift away from fruits they would not find in the wild, where they would also eat some leaves and even eggs from birds’ nests. Biologists will hide their food in the enclosure “to awaken that wild, natural instinct,” Núñez said.

They will only be reintroduced to the wild after thorough evaluation by the canter’s biologists and specialists from nongovernmental organisations. The monkeys will need to show that they can find their food and recognise other members of their species.