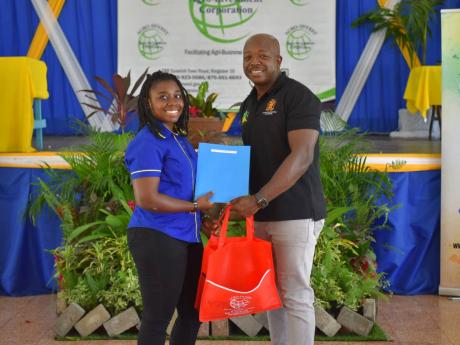 Minister of Agriculture and Fisheries Pearnel Charles Jr (right), presents Abiona Green, 27, with a lease agreement for agricultural lands, during a ceremony at the Ebony Park HEART Academy in Clarendon, on Tuesday.

Thirty young farmers have been selected for agricultural land leases across the country's agro-parks and production zones.

This has been done under the Agro-Investment Corporation (AIC) 'Youth in Agriculture' programme. Minister of Agriculture and Fisheries, Pearnel Charles Jr, said the initiative continues the Government's mandate of focusing at least 20 per cent of its activities on youth.

"The goal of the ministry is to make sure that we make productive use of our lands, and the best way to do so is to make those lands an investment for our youth," the minister said.

He was speaking at the handover ceremony for the leases at the Ebony Park HEART Academy in Clarendon, on Tuesday. A total of 150 applications were received, after which the 30 persons were selected. Seventeen of them received their leases at the ceremony. As part of the arrangement, each farmer will pay a reduced rate of $7,000 per acre, per year, for the lands.

CEO of the AIC, Dr Al Powell, said recipients were trained and selected by the entity and the Jamaica 4-H Clubs.

"These youth will join other investors in the production of several crops that we eat, grow and export," Powell said.

For 28-year-old Abiona Green, one of the recipients, the handover of the lease agreements brings a "sigh of relief".

"I am really happy I got it; it's a good feeling," said the former University of Technology, Jamaica, student. She shared that her aim is to have a self-sufficient farm at the Ebony Park Agro-Park.

"I want to plant both cash crops and long-term crops," she said. Delano Willis, 24, told JIS News that he is excited for the prospects that are to come from his leased lands at the Plantain Garden River Agro-Park in St Thomas. Willis explained that one of his goals is for his peers to see farming as a lucrative business opportunity.

"I always try to encourage other youth to get into farming and see that this is a good business. I am looking forward to reaping from this investment," he said.

In addition to the lease agreements, the beneficiaries will receive support from the AIC including agronomic information, land preparation, technical support and market linkages, in partnership with stakeholder agencies.