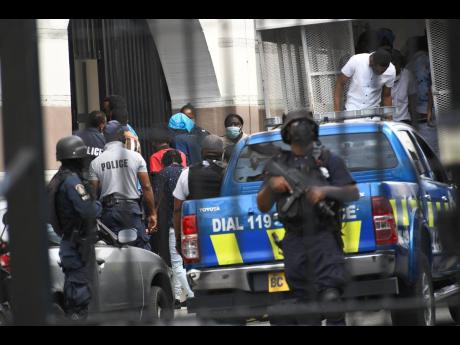 As the alleged Clansman-One Don Gang gangsters continue to disassociate themselves from the gang and any form of criminal acts, another one yesterday described himself as just an innocent homebody who does not even know how a gun looks.

The defendant, Dylon McLean, was identified by a former top-tier gang member as one of the gang's lookout persons and as a bodyguard for reputed gang leader Andre 'Blackman' Bryan. The prosecution witness, who was also one of Bryan's drivers, had told the court that he saw McLean removing an Intratech sub-machine gun from his roof and also saw him with a gun in the Shelter Rock community in Spanish Town, St Catherine.

But the 26-year-old warehouse attendant, while giving an unsworn statement yesterday, said the witness was not being truthful.

"This man even come telling lies that I have a gun in my roof and I don't have a board top, Sir, all of my house a concrete," he said. "This man even say I am a lookout for the gang and bodyguard for a man which Sir, sometimes if I am at home, I would be on my wall taking Wi-Fi and a lady across the shop would always see mi all the time."

While insisting that he had no knowledge about the witness' claims, McLean said he hardly exits his house.

"I never own a gun yet or fire a gun yet and this man say mi have an Intratech sub-machine gun. I don't even know how gun look, Sir. This man a really don't know," he said.

Defendant Ted Prince, in his unsworn statement, told the court that he was just a shoemaker and that he knows nothing about any gang.

"When mi naa build shoes mi a work pon construction site. Mi nuh know nothing bout this witness or nothing bout nuh shooting nor suspicion of no shooting," he said. "Mi is a hard-working man. When mi not working mi might deh inna the lane a play some cards or something." According to Prince, the witness, also claimed that he had been shot but he said that was inaccurate. Prince also denied the witness' report that he had shot and killed a man at a hardware in Spanish Town and that he had followed the gang to the Fisheries area of the parish where a couple was murdered and their house set ablaze.

"I don't know this man from nowhere for him to be telling all these lies on me," Prince said. The two men were the last of the 26 defendants who have given unsworn and sworn statements in their respective cases. Two defendants had, however, opted to remain silent. However, defence lawyers are awaiting the custody book from the Spanish Town Police Station and the prisoner's admission book from the Horizon Adult Remand Centre, which they have already subpoenaed to complete their client's case. The trial was adjourned until Monday.