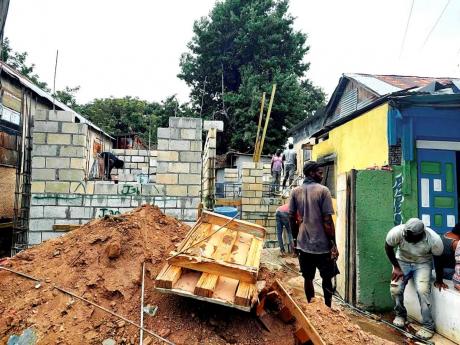 Workmen erect a dwelling for one of the beneficiaries of a housing project. 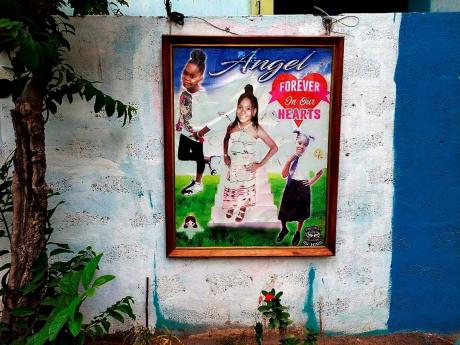 (Below) A memorial for Jazeriah Tyrell, who was one of the victims of gun violence in central Kingston last year. 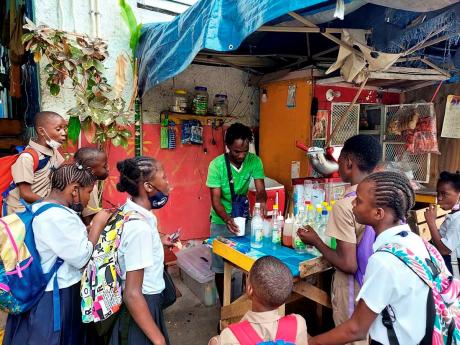 Schoolchildren making their way home stop for a refreshing snow cone at Kevin’s stall on Laws Street. This is a sign that life is returning to some level of normalcy in the area.
1
2
3

An air of melancholy surrounds Dahlia Spence as she mentally prepares for what would have been her daughter Jazeriah Tyrell's 11th birthday.

The 38-year-old resident of Parade Gardens in Kingston believes that Jazeriah would be alive today if a zone of special operations (ZOSO) had been declared in the community sooner. Jazeriah, a former student at the Holy Family Primary School, was shot and killed by unknown assailants on December 30 while she was sleeping at her stepfather's house on Wildman Street. After months of persistent pleas, the ZOSO for areas of central Kingston was established on January 9.

In 2021, the blood-soaked Kingston Central Police Division came under heavy gunfire as violent activities carried out by rivals from the warring Genasyde and Darkside gangs took the lives of 79 persons, including Jazeriah. At one point, residents protested outside Gordon House, demanding better security. However, according to the division's commanding officer, Superintendent Berrisford Williams, this year has seen a reduction in both murders and shootings, at 46 and 42 per cent, respectively, when compared to the corresponding period last year. The numbers have lifted the spirits of several residents, but not Spence, who has taken the peace permeating Parade Gardens and surrounding areas with a grain of salt.

"It come like dem did a wait pon my daughter fi dead fi put ZOSO, 'cause look how much people did a dead before that inna last year," said the mother of two. "Mi waan back mi daughter. Right now, from morning mi no eat nothing, because har birthday a come up next week and di only thing mi can do is to think about her." Spence admitted, however, that the presence of the lawmen has made life simpler for residents.

"Mi a smile, but I am crying inside same way. Wi love fi see the soldier and police dem, because if dem never deh yah a whole heap a people would a dead," she said.

THE STAR, during a tour of the division on Monday, observed a number of significant changes in several areas like Rose Gardens, Site, Tel Aviv and Parade Gardens. Children were spotted cheerfully making their way home from school. Also, there seems to be a vast improvement in economical activities in the areas. Hyacinth, a senior citizen living in Site, said she was now able to put out her stall, as she no longer feels threatened by the violence.

"A months mi couldn't come out, because there was nobody here to sell to. Mi can now save a likkle $300 a daytime, but a true the ZOSO mek dis possible. Me wish it stay forever, because nobody no wah go back to the state where not even dog wah walk pon di road," she said. Kevin said that since the ZOSO was implemented, he has brought back his snow cone business to Laws Street.