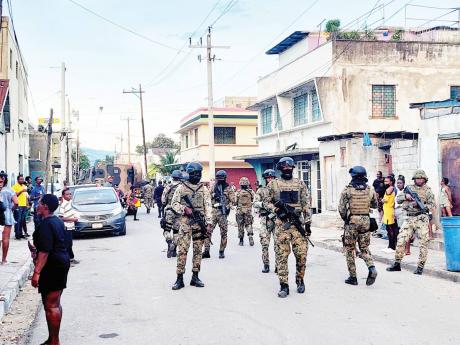 A west Kingston mother who lost two sons to gun violence in Denham Town has called for a different approach from members of the security forces.

This after she said that she, her sister and her fiance were roughed up by lawmen yesterday morning after a shootout between soldiers and gunmen in the Golden Heights housing scheme.

In a release, the Jamaica Defence Force (JDF) said that some of its members were fired upon by an unidentified man in the vicinity of Race Course and Blount Street. The incident is the latest in a string of violent spats in the community which was declared a zone of special operations (ZOSO) in 2017. Susan* said that after her fiance dropped her and her sister off, security forces pulled up on him.

"Me and mi sister stand up and a watch di proceedings cause dem have dem gun a point inna di vehicle but wi know say him clean. Same time dem start bark at we a say wi fi go inna wi yard," she said. Susan said they refused and alleged that one soldier threatened to pepper spray them.

"That is when mi and dem start go at it. If yuh ever hear how dem a behave and a gwan. Mi affi get ignorant on dem," she said. Susan opined that when the soldiers first arrived during the ZOSO "everything was nice".

"Who nah charge phone a somebody yard, a go woman yard fi food and all different things. [But] Di soldier dem get too friendly," she said. "Most of who they are abusing are people who are not involved in gun violence. The security forces are not effective so dem affi try a different approach because it will always play out like this."

The JDF said that following yesterday's shootout, a 9mm pistol was recovered from the scene. A woman who was reportedly obstructing a search operation was arrested by the police.

Meanwhile, JDF Chief of Defence Staff, Rear Admiral Antonette Wemyss Gorman, has maintained that she will not hesitate to hold her troops accountable for any excessive force they use unnecessarily when carrying out their duties in the public domain.