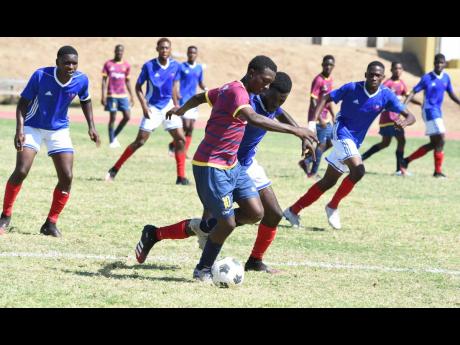 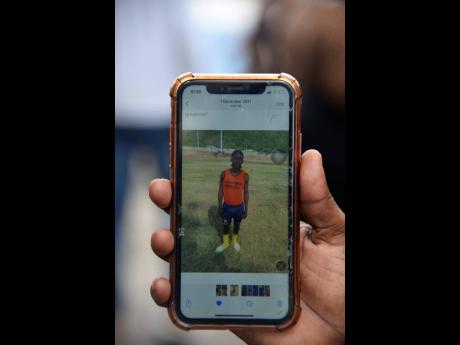 A photo of Omar Laing captured on a friend's smartphone. 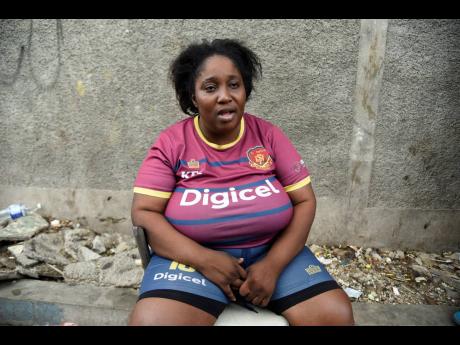 Melorine Gizzard, the mother of slain teenage footballer Omar Laing, says that it was always his dream to make life better for her and the family.

The 34-year-old mother of three looked a dejected figure on Sunday at her home in central Kingston as she tried to make sense of Friday's tragedy. Laing, a former St Andrew Technical High School football star, who was recently called to the National Under-20 team, was shot and killed in a drive-by while walking home hours into his 18th birthday. Two other persons were shot and injured in the attack which took place along Charles Street. Yesterday, Gizzard was clad in her son's Manning Cup gear, drowning in a sea of emotions. She said that Laing, a member of the Cavalier Football Club, was loved by everyone.

"Him never mix up inna nothing. Mi say anytime mi cyah find him a ball him a play. All if him inna him house a sleep, people call him fi come play ball. Mi watch mi son play ball everywhere," she said, noting her son was looking forward to having a birthday party.

"Dis year him stick out pon it say him ago keep it. A so me end up buy him suit fi him. Mi cyah sleep from it happen. Mi affi a put garlic inna mi mouth fi ensure mi pressure no go up too high," she said. Gizzard said that she was in her home when she heard the gunshots.

"So me a run a come out now. Meanwhile mi a run a come out, him fada a run come in. Mi a run go round deh and some people say 'Melorine, a likkle Ranz dem kill'," she said, painting a gruesome picture of the bullet wounds in her son's head. Gizzard made an impassioned plea for Jamaicans to be be serious about tackling crime.

"Di people dem a Jamaica need to stop the crime and we need to unite against the violence because more time is the innocent ones feeling it, just like my son. Innocent! Dat likkle boy don't feisty with people. Oh God! None a wi nah tek it easy, enuh," she said.

Deputy Superintendent Linval Phoenix, who is the operations officer for the Kingston Central Police Division, told THE STAR that even as a 29-year veteran of the police force, he, too, was shaken.

"This particular one is the first I have ever been on a murder scene and tears came from out my eyes to the amount of people weh a bawl. It touched down to the baby! It is the first time I have ever been touched like that," he said. Phoenix added that a designated patrol unit has been deployed in the area to prevent any reprisals. There is a theory that an illegal car park could be the reason for recent shootings.

"That general area has always been a cause for concern and a flashpoint with men from Luke Lane, both upper and middle, as well as men from Hannah Town because of the illegal car park in front of KPH [Kingston Public Hospital]. That is the source of the discontent for a long time, and I am speaking about from 2009," he said.