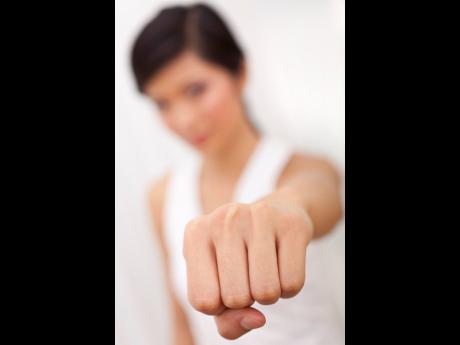 Two women who went to the Supreme Court to give support to a man on a murder charge found themselves on the wrong side of the law after engaging in a brawl in front of the court earlier this month.

One of the women, Caphia Harris, said that she went to court to give support to her partner, Leonard Davis, otherwise known as CJ, only to see Nickola Johnson standing there with him.

"I take off my mask and start cuss him," Harris explained. However, Davis said that he was no longer interested in her and has started a relationship with Johnson.

Davis, who is on bail, accompanied Johnson to court yesterday. He told the judge that he invited Harris to court because she had, on numerous occasions, expressed an interest in seeing him.

For her part, Johnson, the other woman in the brawl, told Senior Parish Judge Lori-Ann Cole-Montague that Harris has been annoying her through numerous text messages.

However, Harris told the judge that Johnson was using Davis' phone number to make contact with her.

"I messaged his (Davis) phone but she took his chip [SIM card] and put in her phone. She is the one weh a text me, Your Honour, and say to me say 'I'm not here to argue or fight over CJ. I just want to ask you something. Do you have a man?' I say "CJ is my man weh me deh wid for four years and me walk public [Kingston Public Hospital] fi him and jail house'. I have the text dem in my phone," Harris told the court.

Having heard the accounts of the parties, Cole-Montague told Davis that he was playing a dangerous game.

"She [Harris] has a legitimate expectation that you know, the two of you together. You a text her up and tell her that she can come court and whatever. So, in her mind, when you do something like that, she [Harris] feels as if, 'well me and him back again'. I can see why she would feel the way she feel so you have to understand why she feel the way she feel. I hear your reason, but sometime you just have to come straight. You were wrong, Sir, nuh play wid a woman head, yuh know," the learned judge commented.

The judge then sentenced the women -- who earlier pleaded guilty -- for failing to wear a mask under the Disaster Risk Management Act, disorderly conduct and indecent language.

"People must have respect for the organs of law and order," the judge said in reference to the fact that the brawl took place in front of a courthouse.

Harris and Johnson were each ordered to pay a fine of $2,000 or face 10 days' imprisonment on the counts of indecent language and disorderly conduct.