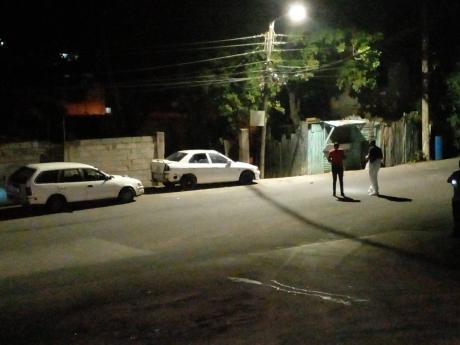 Investigators on the scene at Tuesday night’s shooting in Appleton Hall, St James.

One man was shot and killed, and two others shot and injured when the vehicle in which they were travelling was ambushed by armed men, along the Salt Spring main road in St James, on Tuesday night.

The deceased has been identified as Akeem Frazer, otherwise called 'Okeen' of Richmond Hill in Bickersteth, in the parish.

Reports are that about 8 p.m., Frazer, his father, a cousin and a close family friend, who was the driver, were travelling in a Toyota Corolla motor car when on reaching the Salt Spring road and Appleton Hall intersection, they met up with two other men. All six were ambushed by men travelling in another motor vehicle.

The gunmen opened fire hitting Frazer, the driver and another man multiple times before speeding away from the scene, followed by the police who were summoned. Frazer reportedly died on the spot, while the driver and other man were rushed to the Cornwall Regional Hospital where they were admitted.