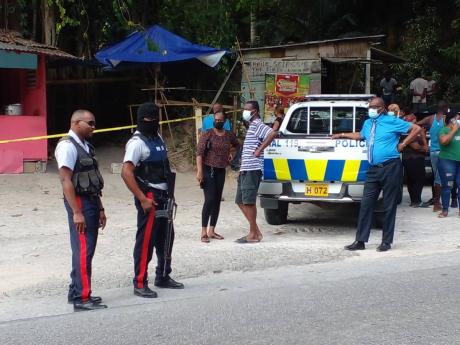 Police personnel and curious onlookers at the Triple Palm Restaurant in Great River, St James, where the female operator was shot and killed by three armed men on Tuesday.

A restaurant operator is the latest murder victim in St James, the 23rd in the parish for 2022.

She has been identified as Rose 'Ogre' Christian, 52, who resided at Woodland district, in neighbouring Hanover. Reports by the Anchovy police are that about 2 p.m., Christian, her son, and her husband were at the Triple Palm Restaurant which they operate on the Great River. Four men posing as customers drove to the establishment in a motor vehicle, and three of them ordered food. While being served, the men brandished handguns and opened fire hitting Christian and her son, before escaping in the motor vehicle. Christian died on the spot, while her son was transported to hospital, where he was admitted. One resident said that he had to run for cover when he discovered what was taking place.

He said that this incident brings back horrific memories to the community, and pointed out that the location is where Nicola Clark was set on fire and her business place burnt to the ground last May. Clarke succumbed to her injuries in August.

Reverend Glendon Powell, pastor of Unity Hall Open Bible Church, said Christian was a hard-working Christian who was not known to create problems or mischief.