Court hears that bus driver was killed after extortion report 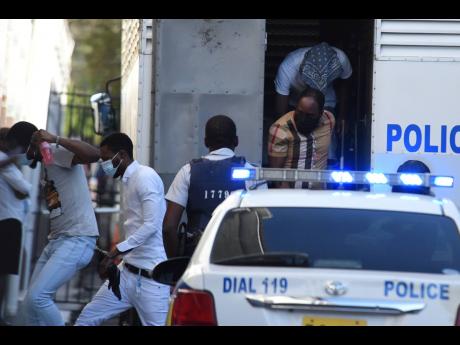 Alleged members of the One Don Gang, a faction of the Clansman Gang, arrive at court for trial on Monday.

A police sergeant yesterday disclosed that a driver in the Spanish Town bus park in St Catherine who made a formal report about extortion was killed some time after.

The Clansman-One Don Gang is reported to have been the main perpetrator of the extortion racket in the bus park and in the wider Spanish Town area.

"Numerous drivers made reports but never formal report to me," he told the Home Circuit Court yesterday in the ongoing gang trial in which alleged members of the gang are facing several charges. However, he recalled that one driver, known to him as 'Tandybay', did make a formal report but was killed on February 6, 2018. The driver was reportedly attacked and shot by members of the One Don Gang shortly after he had loaded his bus with passengers and had exited the bus park.

The police witness, a sergeant, who had been assigned to work at the bus park because of an ongoing problem with extortion, said he rushed the injured man to hospital using his bus. He said that the driver tried to talk to him but he could not understand what he was saying.

The witness said on the day in question, he was at the bus park working when the driver completed loading his bus around 8:50 p.m. and then exited the facility. The witness said that after the bus went out of his sight, he heard loud explosions that sounded like gunshots.

He said he and his colleagues went to the gate of the bus park on Burke Road where they saw passengers fleeing the bus. The sergeant said he saw the driver in the front seat with blood on his shirt. He said that he called for assistance but did not wait to take the man to the Spanish Town Hospital. The trial continues today.