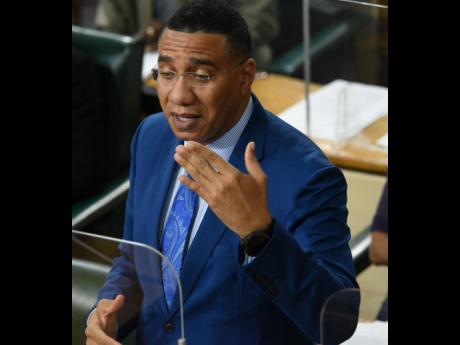 Prime Minister, Andrew Holness, has announced that each constituency will be allocated $16 million for road patching, debushing, and drain-cleaning works.

Mr Holness made the announcement during a statement to the House of Representatives, on Tuesday.

Giving a breakdown of how the money will be spent, Prime Minister Holness said $7 million has been allocated for road patching; however, no reallocation from this area will be allowed.

“You may reallocate an accumulated amount of $5 million from elsewhere in the programme to road patching,” he stated.

He further informed that $4 million is to be spent on debushing, all of which can be reallocated, but funds from the other areas of the programme cannot be reallocated to it.

“These funds will remain available for use until the end of January next year. So, if they are not used up by then, we will reclaim those resources. So, you have to get your programmes in from now, get the patching done,” Mr Holness urged.

“You probably will not be able to get all the patching done for Christmas, but certainly, you would want to have it done by the end of January next year. The bushing and the drain cleaning and the garbage collection must be executed before the end of December for payment to be made. In fact, you probably want to be finished by the end of the second week in December to facilitate payments,” he added.

Meanwhile, the Prime Minister said the Government may have to re-examine the way in which it pays, remits, or transfers resources to its citizens.

“Presently, there are some processes where funds, having been approved, would go through a contractor.  It is then broken down to a smaller level, maybe to a supervisor, and then it is paid out. We may have to look at a process where someone who wants to benefit from a programme would have to register, so we know who the final beneficiary of the labour works is,” Mr Holness said.

“We have to increase accountability, and these programmes are going to come under scrutiny. There are some weaknesses in the system that we have to correct. Of course, these are not things that can be done overnight; we have to first of all improve the efficiency of our banking system,” he added.

The National Works Agency (NWA) will provide oversight for the mitigation programme.