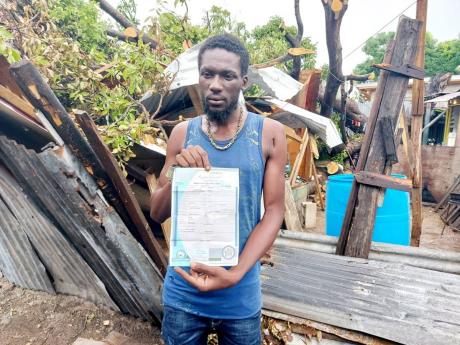 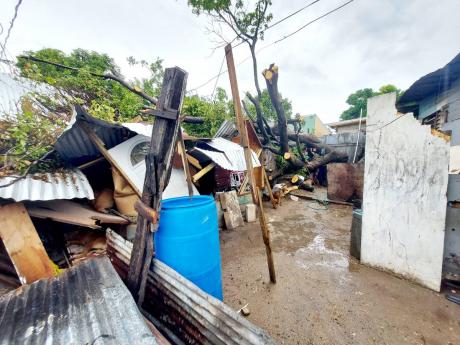 Johnson’s home was destroyed after a tree fell on it.
1
2

Standing in front of his smashed two-bedroom board dwelling, Garnet Johnson reflected on his life with tears flowing from his eyes.

"l always dream of becoming a big chef. I would like to own a restaurant or something ... but really and truly, what I want the most is to meet my parents. To feel a mother's hug," Johnson, 27, tells THE STAR from what's left of his home at Georges Lane, off Waltham Park Road in Kingston.

"Most times mi see people disrespect dem mother, mi go one side and cry because mi a say mi wish mi could a know my own. Mi never had a mother fi send mi fi go fi no ice water or dem simple things deh." Johnson, who said that he does not know any of his relatives, wiped away tears with a handkerchief before looking back at what's left of the place he's called home for years. His house, which he built himself, was destroyed when a large branch of an ackee tree fell on its roof on Monday.

"About $400,000 mi spend fi build mi place from scratch including di things weh mi have inside like mi bed, dresser and so forth," he said. Johnson said that this setback mentally brought him back to a place from which he worked hard to set himself free.

"Mi always know say when setback gwan yuh affi build back again. Mi used to sleep comfortable now mi no have that again. Every night now mi affi a sleep like a jailer, a two iron chair mi join together since this happen and sleep pon," he said. "Dis now is just painful. My life would be a lot better. Most a di mistakes mi mek in life if I had parents I wouldn't make dem. Mi did affi know right from wrong, love and hate off mi own."

Johnson, who said he was told that his mother gave him up when he was seven months old, said he lived at both the Windsor Lodge and St John Bosco boys homes, both in Manchester. At those homes, Johnson, who sells peppered shrimp in the Corporate Area for a living, said he learned about social graces and independent life skills.

"Dem always a teach wi love, joy, peace, patience and kindness. To have goodness and faith. Those things carried me through," he said. Johnson claimed he briefly lived with a family in Mandeville who adopted him but said he's been on his own since age 17, after his adopted parents died. He moved to the Corporate area soon after.

"A me dis same way, mi still a live and a nuff struggles mi face. Wul heap a night mi go a mi bed without something to eat. Nuff trouble mi get ina facing life out on the streets," he said. Though disheartened by his latest setback, Johnson recalls advice he received at St John Bosco.

"Yuh need fi get up and keep moving, keep yuh head up 'cause people will see yuh half way and come meet yuh," he said. Despite two failed attempts to find his birth parents, Johnson said that he is still hoping to meet them. He also expressed a desire to start his own family.

"I haven't found the right girl yet, or the right girl don't look at me yet. Mi well want a family, mi want my youths dem fi grow knowing say dem have a very good father to them. Mi know mi would a do better than weh mi see nuff father a gwan wid," he said.