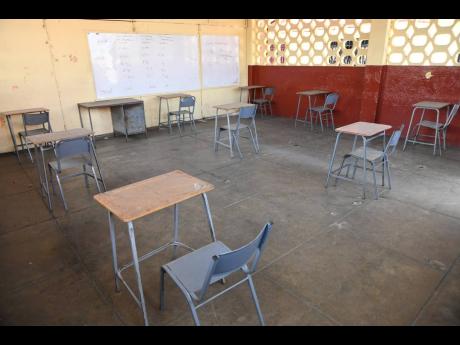 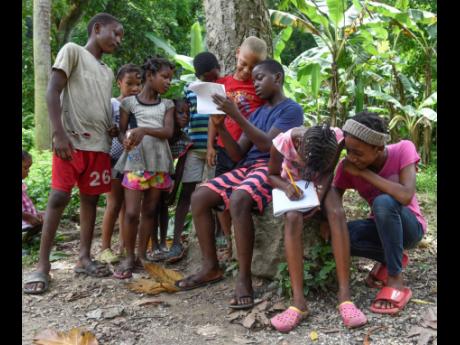 Children in Kent Village, St Catherine, catch up on some lessons. Residents say the students have not been able to participate in online schooling due to lack of devices.
1
2

Any further delays in the resumption of face-to-face learning in schools will put the nation's children, particularly the underserved, at great risk of having permanent mental breakdowns, according university lecturer Dr Orville Beckford.

Schools, for the most part, have been closed to face-to-face learning since last March. Beckford said that if things remain that way for the next two or three years, Jamaica's children will inevitably start to demonstrate disturbing behavioural patterns.

"We have to begin to wrap our heads around how will that affect the community that they are from, how will it affect crime, mental health and a whole heap of other social issues," he said.

"Also, the fact that in lockdowns they become more aggressive because they could go a football match, take in a play, go to school and see their friends. That is not there anymore."

Beckford also thinks the future becomes more complex and worrisome when poorer children, specifically those from troubled inner-city communities, are left behind in their education due to an inability to access education online.

"But what make it worse is that the youth them are now embedded with the same gunman dem who will carry certain things to them because they are now easier accessible. The parents dem worse don't have any money, and with them not going to school, and so they see this as the only way to eat a food," he said.

Recently, Education Minister Fayval Williams announced that the Government has distributed 125,000 tablets and laptops to children. However, many children are still either without devices or Internet connection.

Last Thursday during a COVID press conference, Dr Melody Ennis, director of Family Health Services in the health ministry, said the ministry was still unclear as to when face-to-face learning will resume.

"We are not sure. We continue to look at our vaccination rate uptake. We also need to look at what is happening in the country, our positivity rate, and we need to look at all of that in order to make a determination. Please also be reminded that we are waiting on Pfizer doses to come into the country, we will be administering second doses to children and to ensure that first doses are offered to children," she said.

Beckford also reasoned that a lack of face-to-face learning will impact how children learn to respect rules and their elders, speak properly and become employable. But he stressed that the mental state of the children is of concern.

"The fact that they are being constantly traumatised means that we will find people with psychological issues, psychosocial issues, psychosocial adjustments in many areas. What we will find is rather than being properly socialised, they are 'mal-socialised'. These issues will play out themselves in many different ways that will not only be detrimental to the family or the community, but to the country as well," he said.

Beckford is uncertain whether the Government will achieve its target of vaccinating 65 per cent of the population by next March.

"I don't believe the virus is going to go away by next week. I see this going beyond 2023, because so many people have not taken the vaccine and are not wearing their masks. So all of these social problems are going to fester and fester, if we don't do something about it by providing social safety net interventions," he said.