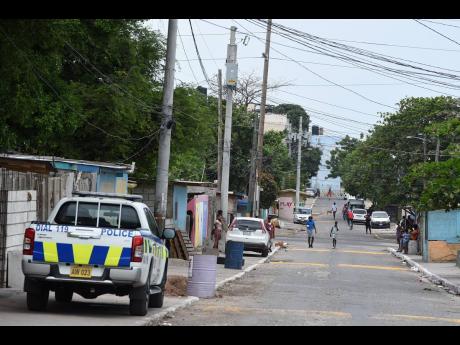 Police keeping a watch on Fourth Street in Trench Town.

As health workers hurriedly seek to administer the 60,000 doses of AstraZeneca vaccine that expire today, residents of inner-city communities are lamenting that poor public education and interruptions caused by violence have helped to cause low vaccination levels in their areas.

Residents from Trench Town in South St Andrew, Denham Town in West Kingston and Parade Gardens in Central Kingston told the news team that some of them have not taken the jab as they are afraid to venture outside of their communities, fearing that they may be struck by gunshots fired from warring factions.

"They are really, really afraid to go outside the community. The war around here, it bad. People move out nuff nuff since the war start and nobody nah come down here fi help us. We would want the vaccine, yes but we just afraid," the resident said.

Trench Town resident Bob* explained that about two weeks ago, representatives from the Ministry of Health and Wellness conducted a vaccination drive in the community. However, since that initiative, no other support has since been administered to the crime stifled community.

"We need more a dem initiative down here. Me lucky fi get my first dose of the Pfizer when it just start out and me had to go Stadium. But wah about the people who can't go outside the community? Wah bout dem?" he stressed.

For Roy*, a resident of Parade Gardens, he has not yet received a dose of any of the three available vaccines due to personal reasons. He added that there are other persons within the community who have their reservations about the vaccines and pleaded for greater public education.

"Everybody has their suspicions about the vaccine. I know why I haven't taken it and a lot of people have their own reasons and suspicions. They just need to tell us more about it because me really curious about this thing. I think I have all the knowledge but me just need to know more," Roy told THE STAR.