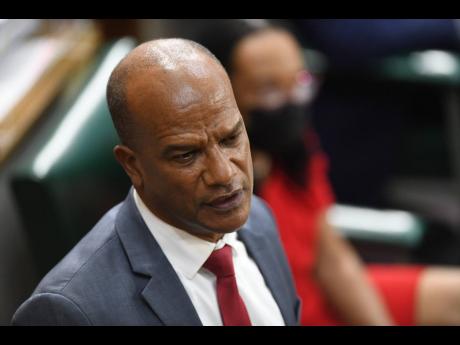 Opposition Senator Peter Bunting is calling for the Disaster Risk Management Act (DRMA) to be reviewed, following the recent incident with former agriculture minister Floyd Green, who resigned after he was discovered at a party on a no-movement day.

Bunting was speaking at the bi-monthly conference of the Crime Monitoring and Oversight Committee yesterday, where he described the controversy surrounding Green as highlighting the 'double standard' in society.

He made particular mention of comments by Deputy Superintendent of Police Fitz Bailey, who explained that a recent amendment of the DRMA removes the requirement for exempted people to only move on lockdown days in the course of their duties. Bunting said those comments were a cause for concern and put the Jamaica Constabulary Force (JCF) in a difficult position.

"The most effective way to destroy all respect for the rule of law, is to make it obvious that the law will only be applied to the poor and the powerless. If the elite in this country are filled boasting about their immunity from the law, the people can see that our society is both deeply unequal and fundamentally unfair. We cannot then expect them to behave like a decent citizen. They have seen their leaders mocking them and it puts the JCF in an invidious position," Bunting said.