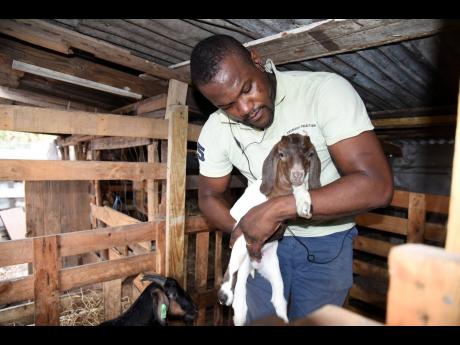 Leon Golding checks on his livestock. 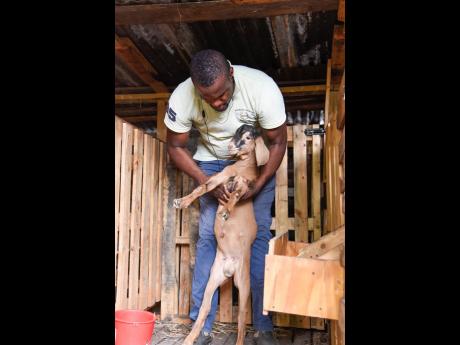 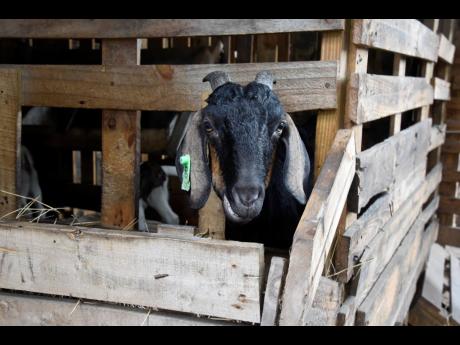 Bucky, a boer ram, pokes his head out from his shed. 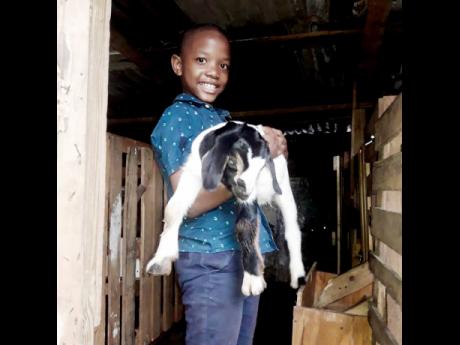 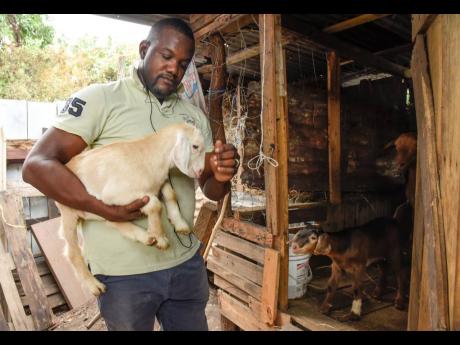 Leon Golding said that his goats give a listening ear as well as countless cuddles.
1
2
3
4
5

At the sight of their owner Leon Golding entering the goat shed, the herd started bleating in harmony. They ran into his arms in loving caress, as he prepared to tend to their daily needs.

Golding, whose animals are housed in the Corporate Area, said that he ventured into the small ruminants business after trying his hands at something else, which failed. He said that his colleagues suggested farming, and with no hesitation, he took the bold step. In February 2020, he travelled to Ebony Park, Clarendon, and bought his first graded Boer female, which he named Redz.

"I was looking at something less labour intensive. Chickens are a bit more intensive, and in terms of the cost for production and turnover, the market was not a stable market for chicken farming. I have always had goats. When I was younger going to school my mother bought myself and my brothers and sister goats, but not in this set up, not adopting to the advanced technology in goat farming," Golding shared.

He admitted that while a student at the Norman Manley High School, he was not conscious of the economic value that goats held. Almost two decades later, he is curious about learning and mastering the craft of animal husbandry, specifically goat breeding and rearing.

The 35-year-old explained that goat farming has more perks, as opposed to sheep farming, and pointed out that it is advantageous to the environments in St Andrew. To add, he was not hesitant in sharing that he single-handed constructed the pen, with his major concern being to ensure that it does not have an offensive odour. The slotted floors were recommended by other goat farmers, as it reduces the interaction of animals and their faeces, which sometimes carries the egg of worms from their intestines. In addition, clean-up time is reduced as he only cleans their pen once a week.

A typical day for the new farmer begins at 7 a.m., which sees him first cleaning the pens then washing their water buckets and putting hay into their trough. He then spends another hour carefully observing the animals, watching their breathing and body movements to ensure that there is nothing amiss. Not only has he learned to pay attention to his animals, but he recognised that it was a venture that required patience.

"Let me tell you, you see a lot of persons going into farming do not understand that farming is not an immediate success. It's a patience game and a learning game, [because] you continually learn and you continually have to apply the patience that you have learnt, and the information that you have learnt into your production. So, when I went into this, my idea was just to buy and sell animals quick, quick and make some money to meet a need that I had at the time -- to pay bills and so forth -- but when I realised the economical value comes when you keep them and they multiply. You can then sell from what you have multiplied and you will see a greater return," he said.

His herd consists of almost a dozen and a half small ruminant from breeds of Boer, Native and Nubian.

Golding, who has a full-time job in the public service and is also is a student at the Caribbean Maritime University, said he would love to see more young persons getting involved in farming.

"We need to change the narratives of schools. I think we need to teach entrepreneurship and teach our youngsters the value of owning their own and that's what I have done as a father of an eight-year-old. I have taken him up and started teaching him the value of ownership and running a business," Golding said.

The civil servant said that he intends to expand his current farm, and to become a farmer like Old McDonald in the popular nursery rhyme. He intends to add cattle and pigs to the goats and birds that now give him therapeutic pleasure.