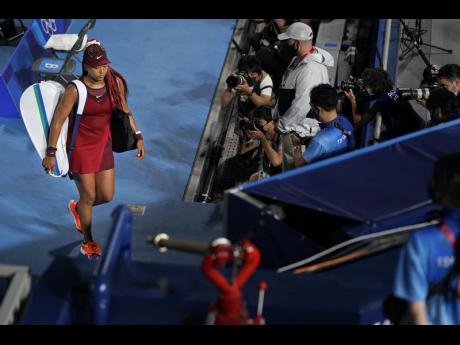 Naomi Osaka, of Japan, leaves center court after being defeated by Marketa Vondrousova, of the Czech Republic, during the third round of the tennis competition at the 2020 Summer Olympics, Tuesday, July 27, 2021, in Tokyo, Japan. (AP Photo/Seth Wenig)

TOKYO (AP) — It wasn’t the ending that Naomi Osaka — nor her multitudes of fans across Japan and worldwide — had expected.

The start of the Tokyo Olympics, however, will forever be a bright memory for the tennis superstar.

Osaka herself said after lighting the Olympic cauldron during last week’s opening ceremony that it was “undoubtedly the greatest athletic achievement and honour I will ever have in my life.”

So maybe — just maybe — that will allow Osaka to cope with her unexpected 6-1, 6-4 loss to former French Open finalist Marketa Vondrousova of the Czech Republic in the third round of the Olympic tennis tournament on Tuesday.

“I’m disappointed in every loss, but I feel like this one sucks more than the others,” Osaka said.

As a four-time Grand Slam champion, the highest-paid female athlete in the world and the host country’s poster girl for the Games, the huge expectations were hard to handle.

“I definitely feel like there was a lot of pressure for this,” Osaka said. “I think it’s maybe because I haven’t played in the Olympics before and for the first year (it) was a bit much.”

The second-ranked Osaka, who was born in Japan and grew up in the United States, struggled with her usually reliable groundstrokes while the left-handed Vondrousova produced a series of drop-shot winners and other crafty shots that drew her opponent out of her comfort zone.

“It’s tough for her also playing in Japan and in the Olympics,” the 42nd-ranked Vondrousova said. “It’s so much pressure, I cannot imagine.”

Osaka won her opening two matches in straight sets following a two-month mental health break. But conditions were different Tuesday with the roof closed because it was raining outside.

Osaka had talked earlier this week about how “happy” she was to be playing again. That came after she announced in May going into the French Open that she wouldn’t speak to reporters at that tournament, saying those interactions create doubts for her.

Then, after her first-round victory in Paris, she skipped the mandatory news conference.

Osaka was fined $15,000 and — surprisingly — publicly reprimanded by those in charge of Grand Slam tournaments, who said she could be suspended if she kept avoiding the media.ut almost immediately handed the break back when she double-faulted to make it 2-2.