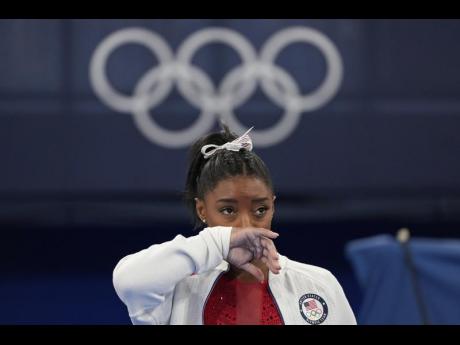 Simone Biles, of the United States, watches gymnasts perform after an apparent injury, at the 2020 Summer Olympics, Tuesday, July 27, 2021, in Tokyo. Biles withdrew from the team finals. (AP Photo/Ashley Landis)

TOKYO (AP) — Simone Biles came to Tokyo as the star of the U.S. Olympic movement and perhaps the Games themselves. It all came to a stunning halt in the women’s gymnastics final on Tuesday night with an uncertain vault.

In a flash, the rest of the American star’s Games came into question. And the United States’ long run at the top of the sport came to an end.

The team representing the Russia Olympic Committee surged past the shorthanded U.S. to the top of the podium, posting a score of 169.258 to win the country’s first Olympic team gold in nearly 30 years.

The Americans, with Biles serving as head cheerleader while clad in a white sweatsuit and dealing with what USA Gymnastics called a “medical issue,” hung on for silver.

Grace McCallum, Sunisa Lee and Jordan Chiles drew the U.S. within eight-tenths of a point through three rotations. ROC, however, never wavered on floor. And they erupted when 21-year-old Angelina Melnikova’s score assured them of the top spot on the podium.

The victory came a day after ROC men’s team edged Japan for the top spot in the men’s final.

The U.S. entered the finals hoping to bounce back from a shaky performance in qualifying, when the Americans came in second to the ROC. It marked the first time in 11 years the U.S. found itself looking up at the scoreboard at someone else.

The team declined to talk to the media afterward, though the 24-year-old did post on social media that she felt the weight of the world on her shoulders and that the Olympics were “no joke.”

Yet, something happened during the first rotation. She attempted an Amanar vault during warmups only to roll out of it upon landing. The code for that vault posted when she saluted the judges, but in midair things went awry.

The vault requires a roundoff back handspring onto the table followed by 2 1/2 twists. Biles instead did just 1 1/2 twists with a big leap forward after landing. She sat down and talked to U.S. team doctor Marcia Faustin, then headed to the back while her teammates moved on to uneven bars without her.

When Biles returned several minutes later, she hugged her teammates and took off her bar grips. And just like that, the greatest of all-time’s night was over.

USA Gymnastics did not specify the nature of Biles’ medical issue, saying in a statement she “will be assessed daily to determine medical clearance for future competitions.”

Biles is scheduled to defend her Olympic title in the all-around final on Thursday. She also qualified for all four event finals later in the Games.

Whether she will get that opportunity remains to be seen.

Biles’ abrupt absence forced the Americans to scramble a bit. The finals are a three-up/three-count format, meaning each country puts three of their four athletes up on an apparatus, with all three scores counting.

Chiles stepped in to take Biles’ place on uneven bars and balance beam. The 20-year-old who made the team with her steady consistency pulled off a solid bars routine and drilled her balance beam set two days after falling twice on the event.

Thanks in part to a little help from ROC — which recorded a pair of falls on beam — the U.S. drew within striking distance heading to floor, the final rotation.

Yet the Americans — without Biles and her otherworldly tumbling — needed to be near perfect to close the gap. It didn’t happen. Chiles stumbled to the mat at the end of her second pass, and any chance the U.S. had of chasing down ROC went right along with it.