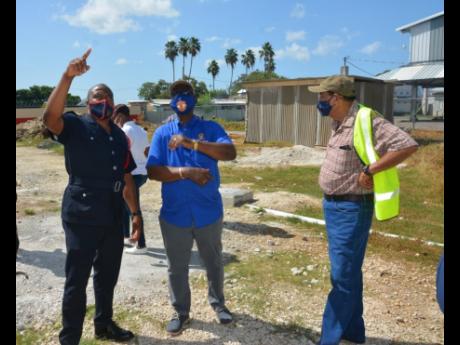 Minister of Local Government and Rural Development, Desmond McKenzie, says that work has been completed on phase one of the $60-million renovation of the Black River Fire Station in St. Elizabeth.

"The first phase includes building a perimeter fence, expanding the capacity of the drain and building a new facility to house fire trucks,” he said, during a tour of the project on July 16.

McKenzie informed that the work is now moving into phase 2, where “they (firefighters) are going to be relocated for a short period of time to facilitate the extensive work that is to take place”, noting that the objective is to create “a well-equipped and responsive firefighting operation”.

The Minister indicated that once the renovation project has been completed, the parish will be receiving two brand-new units out of the 30 fire trucks that are being procured for the country.

He lauded firefighters in St. Elizabeth for their patience and understanding and noted that their hard work has not gone unnoticed.

“I am really proud and I want to commend the Mayor, the firefighters and the team for an excellent job,” McKenzie said.

For his part, Acting Senior Deputy Superintendent in charge of the Black River Fire Station, Oneil Henry, said that the project is already making a difference, noting that the firefighters are able to work more comfortably.

He said the JFB will ensure that the station is maintained and kept in good order to serve the parish “as best as possible”.