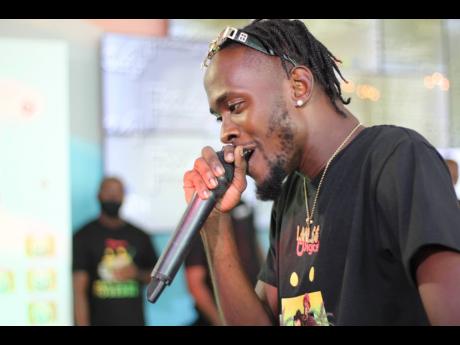 In an Instagram live session last week, dancehall entertainer Laa Lee vented about his treatment by the creators of YouTube series, Balla.

Laa Lee, who was cast as the lead male character in the online series from Barracks Entertainment, said he felt disrespected that his role as Romello Bright, aka 'Balla', was recast by writers. He alleged that after not being paid for his part in the online series, the writers gave his role to someone else, leaving him feeling 'used'. But today, the entertainer's management team is calling the whole saga a misunderstanding.

"There is no bad blood between any of the parties. Laa Lee never have a management team to guide him before and he was just speaking out of passion," said Comar 'Frankie Music' Campbell. He has assumed the role of management for Laa Lee and said the team has been in conversation with Barracks Entertainment and both sides have ironed out all issues.

"He just signed to Frankie Music and the schedule that we have for him just wasn't coinciding with their schedule on the show. It wasn't going to work out and we didn't want to stop the production of Balla. We discussed it with the writers and we found a solution," he said.

Everything else is water under the bridge at this point," he continued. "We apologise on our side, they apologised and so bigger things are coming for both Balla and Laa Lee." Campbell also shared that as per discussions with Barracks Entertainment, Laa Lee would return in his role as Balla for season two. That was confirmed by Barracks Entertainment in a statement sent to THE STAR.

"We are aware that fans have grown to love Mr Romario Ricketts (Laa Lee) playing the role and this decision has come as a disappointment. But in an effort to keep the show going, we had to jointly agree that the Balla character would be replaced. Mr Ricketts will, however, be returning in season 2 of Balla, which is scheduled to be released in November of this year," the statement read. " Balla is our latest production via YouTube that tells the story of a precocious schoolboy who pursues his English teacher. It is a witty tale of teen frivolity and social issues that plague vulnerable youth. Barracks Entertainment remains resolute in our mission of empowering youth through the performing arts. We produce culturally relevant plays that deal with topical issues affecting our young people."